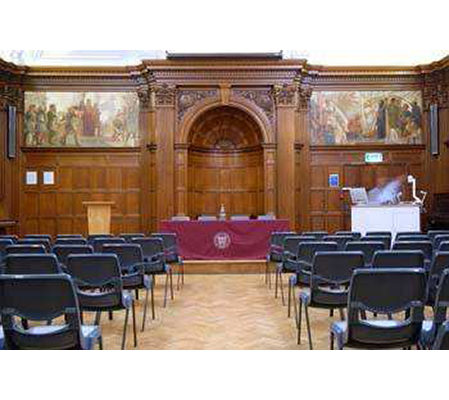 The University of Westminster boasts a rich history and has been providing students with academic excellence, cultural engagement and personal enrichment since its inception as The Polytechnic Institution in 1838.

Fyvie Hall dates from the rebuilding of 309 Regent Street in 1910-1912. The architect responsible for the new building was George Mitchell, later to become Head of the School of Architecture at the Polytechnic. This very special building hosted the first public viewing of a motion picture.

The room is now used for education and conferences with a capacity of up to 150 people. The design of any cooling system had to comply with all of the constraints associated with a Grade 1 listed building.

Fyvie Hall and its associate boardroom were consistently uncomfortable during periods of hot weather during the summer months. The heat made the room unbearable for students and lecturers, a cooling solution was required and as with all universities, the carbon impact of any cooling system needed to be minimised.

Eco Cooling’s evaporative coolers were a perfect solution as the units were able to reduce carbon emissions, making the units an environmentally friendly cooling option as well as reducing operational cooling costs.

Above Fyvie hall is the boardroom, this space is a semi-glazed building with natural ventilation.

Two side discharge EcoCoolers and an extraction system were installed to provide cooling for both rooms. The existing ventilation ducts and openings were utilised to avoid any listed building implications. The EcoCooling Air Supply Fans were installed with pre and post sound attenuation to meet the internal requirement of NC40 and local restrictions.

Each room was fitted with a combined thermostat and humidistat which automatically controls the temperature with a maximum relative humidity. This solution has satisfied the cooling requirements of both these rooms, providing a more comfortable temperature and workspace.