Herman Miller is a leading global manufacturer of premium office and home furniture, founded in the early 1900’s in Michigan, USA. The brand is recognised as being a leading innovator of contemporary interior furnishings and has customers in over 100 countries. The company has four thriving manufacturing facilities, with its UK based site in Bowerhill, Melksham producing 900 chairs a day.

Heating, ventilation and cooling play a crucial role within manufacturing facilities, however, getting it right can be difficult and costly due to the open nature of these sites. This is something that Herman Miller found at its 170,000 sq. ft. PortalMill site. With a large number of employees working on their shop floor, Herman Miller needed a solution that would keep working areas that were prone to overheating from intensive machine-based manufacturing cool as well as reduce team fatigue. It also needed a solution that would insulate the site during the cold winter months. Another consideration for Herman Miller was the government legislation around reducing emissions and its corporate social responsibility to be more energy efficient.

Having a cooling and ventilation system that was effective wasn’t enough, it also needed to be environmentally friendly. This led Herman Miller away from traditional air conditioning and towards an alternative cooling solution.

After considering several different technologies, Herman Miller selected EcoCooling’s UK manufactured units for its PortalMill site. Compared to the other options, the EcoCoolers were more cost-effective, energy-efficient and were proven to work in similar industrial spaces.

Nine evaporative cooling systems were installed at the site, giving Herman Miller complete control of the air temperature and humidity levels in the assembly and manufacturing machine areas. With the need for an all-year-round solution, the EcoCooling ECP units were installed as part of a wider air handling system that allowed for cooling via evaporation and fresh air during summer and the recirculation of fresh air in the winter months. During the summer this means that fresh cool air is ducted into the offices via acoustic lined flexible ducting and 16 4-way diffuser grilles.

The installation was managed by Corsham based SMARTech energy’s team. It took five weeks to finish the project, which included laying more than seven miles of cable throughout the site. Despite the size of the project, SMARTech energy’s experienced team was able to complete the project with minimum disruption to the running of the facility. 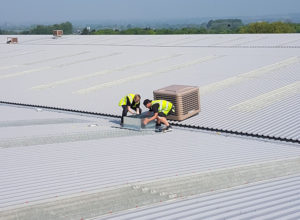 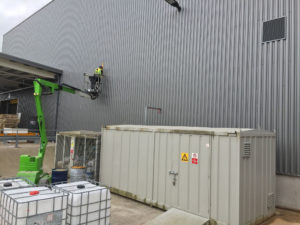 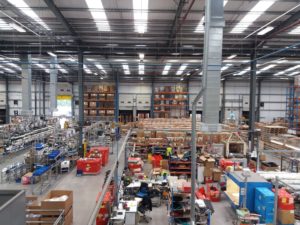 The cooling solution has improved the working environment for Herman Miller’s employees via zonal temperature control. It has also delivered energy savings for the company as the evaporative cooling solution is a completely natural way of producing refreshing cool air. With the running cost being just 10% of traditional air conditioning, it is estimated costs for is just £3.15 per hour for supply and extraction.

“The major benefit of this new ventilation is the improvement in the working environment for the operations team, due to the zonal control of ventilation and cooling. In addition, there will be a reduction in electricity consumption.”

Download your copy of the Herman Miller case study here.